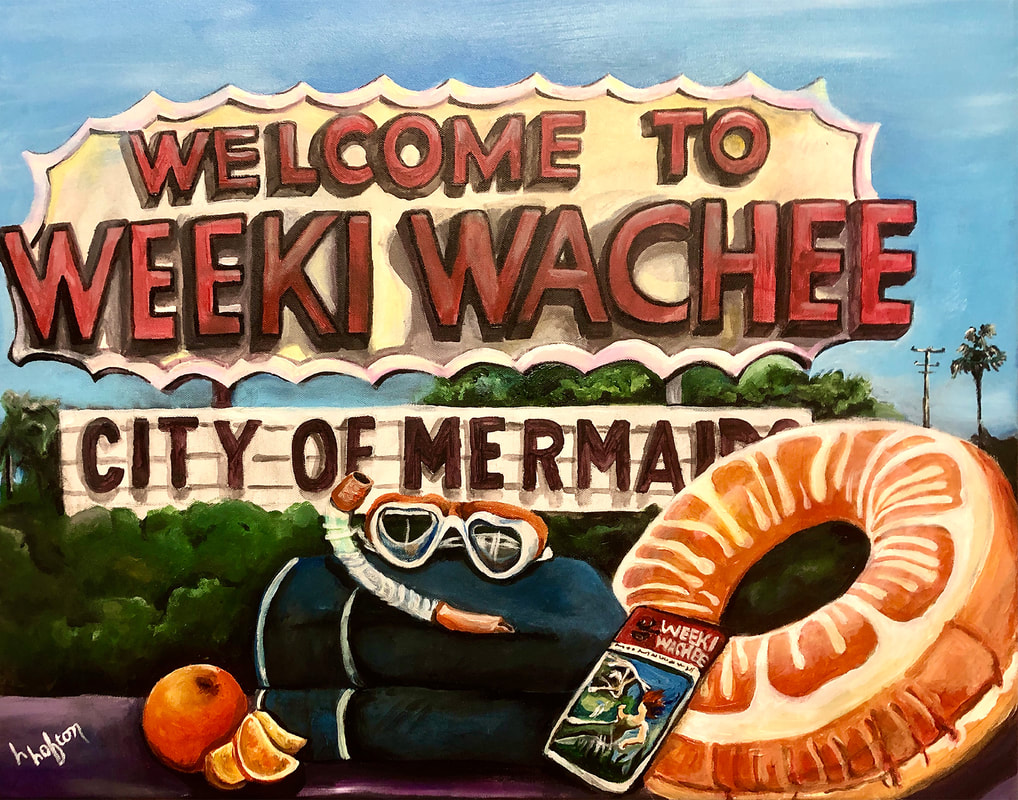 ​Signed Matted Prints available in 11x14 and 8x10
"Florida and the City of Mermaids"  In 1946, Newton Perry, a former U.S. Navy man who trained Navy Frogmen to swim underwater in World War II, scouted out Weeki Wachee as a good site for a new business. At the time, U.S. 19 was a small two-lane road. All the other roads were dirt; there were no gas stations, no groceries, and no movie theaters. More alligators and black bears lived in the area than humans.

Sadly, the spring was full of old rusted refrigerators and abandoned cars. The junk was cleared and Newt experimented with underwater breathing hoses and invented a method of breathing underwater from a free-flowing air hose supplying oxygen from an air compressor, rather than from a tank strapped to the back. With the air hose, humans could give the appearance of thriving twenty feet underwater with no breathing apparatus.
​
Submerged six feet below the water’s surface, an 18-seat theater was built into the limestone so viewers could look right into the natural beauty of the ancient spring.
Newt scouted out pretty girls and trained them to swim with air hoses and smile at the same time. He taught them to do aquatic ballets. He then put a sign out on U.S. 19 that read: WEEKI WACHEE. And on October 13, 1947, the first show at the Weeki Wachee Springs underwater theater opened.  On that day, the mermaids performed synchronized ballet moves underwater while breathing through the air hoses hidden in the scenery.

In the 1950s, Weeki Wachee was one of the nation’s most popular tourist stops. The attraction received worldwide acclaim. Movies were filmed at the spring, like Mr. Peabody and the Mermaid. Sights at the park included the mermaid shows, orchid gardens, jungle cruises, and Indian encampment and a new beach.