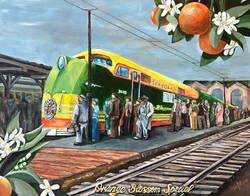 ​Signed Matted Prints available in 11x14 an 8x10
The Orange Blossom Special was a luxury passenger train on the Seaboard Air Line Railroad.  It ran during the winter season from New York to Miami.  The train first started in November of 1925.    In February of 1926 the train took 35 hours to run from New York to West Palm Beach.  The Orange Blossom Special became famous for its speed and luxury.

While stopped at the Jacksonville Seaboard Railroad Station during the maiden run of the streamlined train, there was even a famous song written. Ervin T. Rouse and Robert Russel “Chubby” Wise saw this train and the two wrote the “Orange Blossom Special” song as a fiddle tune. It would later be recorded by Johnny Cash.
“As the story goes, both Chubby Wise and Irvin Rouse visited the Orange Blossom Special when it passed through Jacksonville on an exhibition tour in 1938,” says Randy Noles, author of the book Fiddler’s Curse: The Untold Story of Irvin T. Rouse, Chubby Wise, Johnny Cash and the Orange Blossom Special.
“It’s hard to imagine now, but this was a huge deal. This train had brand new diesel electric locomotives and Pullman cars, and it was on an exhibition tour between Washington and Miami that stopped in every city of any size along the way for people to look at it. Now we think ‘Well gee, it was just a train,’ but at the time it was like the space shuttle coming through town.”
​
When the Orange Blossom Special stopped in Jacksonville, schools closed so children and their families could visit the train. In the two days that the train was parked there, approximately 30,000 people came to see it.
“They were just awestruck by it because of its design and its technology and everything it represented, and Chubby and Irvin were not immune to that,” says Noles. “They visited the train when it came through on the exhibition tour, and as the story goes, they were inspired to write the song.”
​
Image credits and excerpts: Wikipedia.org