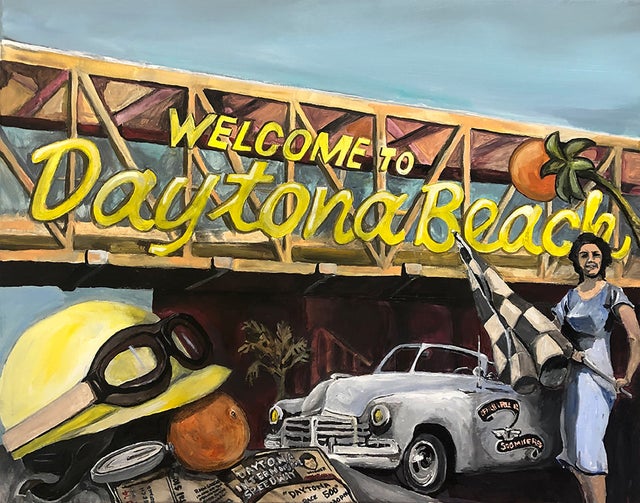 Daytona - Florida on the Fast Track

“Daytona - Florida on the Fast Track” was a must. How can you define Florida without it's FAST TRACK.  When racing competitions started on the beach in 1903, the new horseless carriages were only for the very wealthy. The beach racing lasted into the 50s. The beach was 27 miles long, flat and 500 feet wide.  The first racing enthusiast traveled from England to compete against the Americans.

Bill France, Sr. founded the National Association for Stock Car Auto Racing in 1948, in Daytona.  “The World Center of Racing” was completed in 1959 and hosted the first Daytona 500 on Feb. 22. A crowd of more than 41,000 watched a field of 59 cars race. The finish was so close it took three days to determine Lee Petty had beaten Johnny Beauchamp.

2013 was the first year that a female driver won the pole position spot at the Daytona 500. Danica Patrick took the lead position in her lime green Chevy. She didn’t win the race that day, but she still made plenty of headlines.  Jeff Gordon’s daughter insisted on a picture with Patrick that day in 2013, and not her father.

Well start your engines and wave that checkered FLAG!