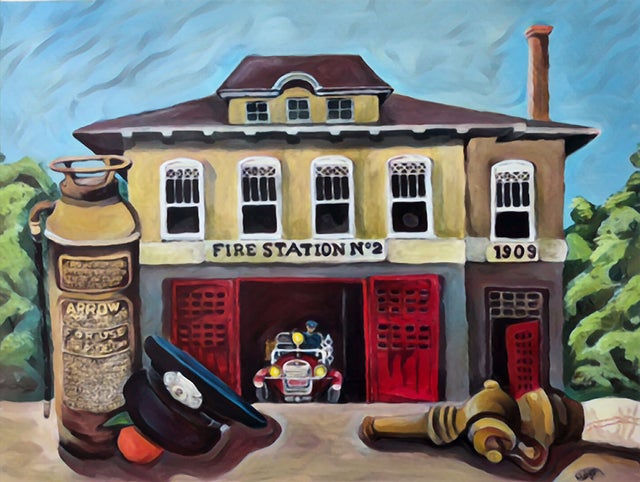 Fire Station 2 is located at 1355 N. Main St. and opened in 1909 and is the oldest fire station in Jacksonville. A fixture in the Springfield neighborhood for 113 years.

“Most of the stories I’ve got, I can’t tell you,” a guy named Joe DeLoach confided Thursday in the bay of Fire Station 2.

Lucky for the listener, the retired fire lieutenant kept talking anyway, as did dozens of other Jacksonville firefighters who gathered for the Springfield station’s centennial celebration.

Here is one story DeLoach, 64, settled on as fit for print.

Back in the 1980s, schoolchildren often came for tours of the station at Main and Fourth streets. Tradition dictated that one of the friendly firefighters would show them how to slide down one of the brass poles.

So, on that particular day, one of the firefighters geared up in a bunker coat, pants, and helmet. Then he added another touch.

The screams started before he was halfway down the pole when the second graders laid eyes on his gorilla mask. By the time he slid to the floor, the entire class and their teacher had bolted to the middle of Main Street.

“From there on out,” DeLoach said, “when we did it, we closed the door.”

For 100 years, those doors have been opening and closing as brave men, and later women, rushed into the city to help whoever needed it.

“For 24 hours a day, seven days a week, those doors have come up and down, and we’ve been saving lives,” said former Engine 2 Capt. Billy Sands. He retired in 2001 after 34 years on the job.